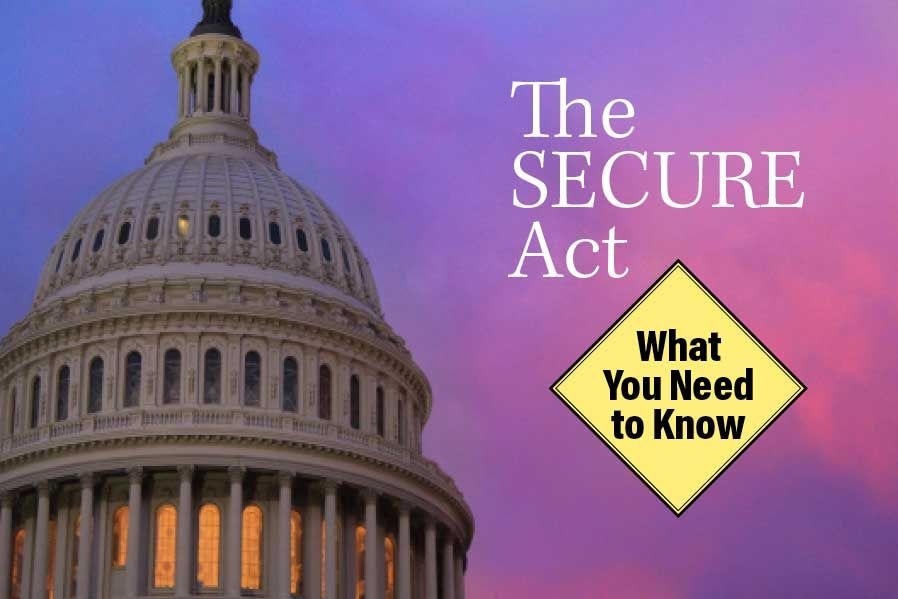 On December 20, 2019 President Trump signed into law one of the biggest changes to affect retirement law since the Pension Protection act back in 2006. The ‘Setting Every Community Up for Retirement Enhancement’ act better known as the SECURE act, is intended to expand opportunities for individuals to increase their retirement savings.

Perhaps the most significant piece of the SECURE act is the change to the Required Minimum Distribution age for certain qualified retirement accounts. Prior to the SECURE Act, the age for a Required Minimum Distributions from IRAs, 401(k)s and similar accounts was set at 70 ½. This age has now been pushed up to age 72. For those that are currently 70 ½ or 71 and have begun taking their RMD under the previous rule, you must continue to do so under the previous rule. However, if you have not already begun taking your RMD under the previous rule and you have not turned 70 ½ by the end of December 2019 you will not be required to take one until your 72nd birthday.

Another key piece of the act is that there is no longer a prohibition on contributions to retirement accounts after age 70 ½. This means that, after December 31, 2019, anyone who has earned income can make an IRA contribution regardless of age. There is also no maximum income for the conversion either, since many people also have a retirement plan, the Traditional IRA contributions are often not tax deductible so there is no tax on the conversion.

The second biggest change with the SECURE act comes in the way of Stretch IRA’s. Previously retirement plan beneficiaries were able to “stretch” required distributions from an inherited account over their lifetime. Now, non-spouse beneficiaries are required to withdraw the entire account balance within 10 years of the account holder’s death. Like any piece of legislation there are exceptions to this rule including a surviving spouse, a child under the age of the majority, a disabled or chronically ill beneficiary who is no more than 10 years younger than the account owner. These beneficiaries can make distribution over their life expectancy. A surviving spouse may also roll inherited amounts to their own IRA – called a spousal rollover – and treat the IRA as if it were their own. These changes take effect for account owners passing away in 2020 and later. If you have already “stretched” an inherited IRA over your life expectancy, you may continue to do so. This provision also applies to Roth IRA and Roth 401(k) accounts. Even though there would be no income tax on the distribution from a Roth, the full account must still be distributed within the 10-year time frame. In addition, if you have previously included IRA balances in your trust planning it is important to re-evaluate that decision now with your trust planning advisor, as the SECURE Act could potentially put that in jeopardy.

If you are planning on having a child or adopting a child, the SECURE Act now allows for a one-time distribution of up to $5,000 with no penalty per IRA account. So, if you and your spouse each hold an account you may each take a $5,000 distribution for a qualified birth or adoption. Even though these distributions have been exempted from the 10% penalty for IRA owners under age 59 ½, these distributions are still subject to regular income tax.

Lastly, the SECURE Act also adds student debt to the definition of “qualified higher education expenses.” Beginning in 2020, 529 funds withdrawn to pay principal and interest on a qualified education loan are now excludable from income. The amount considered a qualified expense is limited to an aggregated lifetime total of $10,000.